From: 96 499 Rands Per Person Sharing
Per Person

Crisscross Namibia, from one detached attraction to the next, while adoring the most extravagant hospitality 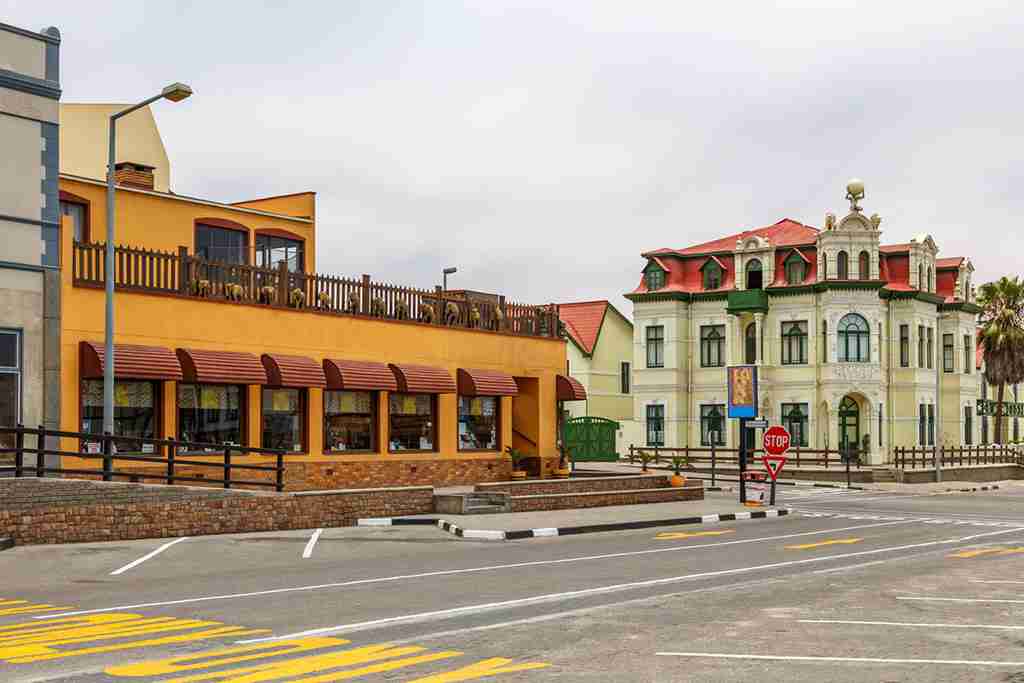 The expedition embarks in the west direction through Okahandja, Karibib and Usakos to Swakopmund. En route we make a stopover in the Erongo Mountains to visit the ancient rock art site known as ‘the White Elephant’. The highway takes us through the amazing Spitzkoppe, which is at a height of 1 728m after which we descend to sea level in Swakopmund. The late afternoon is dedicated to sightseeing    this town, which was founded in 1892 under German colonial rule. Much of the German appeal has been maintained in the town’s old buildings. Visitors are then assisted with check-in at their hotel.

The first stop on this day is at ‘ Bird Rock’, a guano island inhabited by some 200 000 birds. The island is one of the finest examples of man’s attempts to exploit the abundant natural resources in the region. The safari then head-off to the lagoon at Walvis Bay and then on to Sandwich Harbor, the two areas having been nominated as ‘wetlands of international importance’.

En route to Sandwich Harbor, we witness the towering, wind-sculptured dunes of the Namib Desert as they reach right up to edge of the Atlantic Ocean. Some 40 000 birds – 34 different species in total – were logged in this area in a recent surveys. Enjoy a leisurely walk along the lagoon (an official marine sanctuary) and you may also spot seals, dolphins and even whales. The safari then heads back to Swakopmund, reaching at the hotel in the late afternoon.

The safari journeys northwards, enfolding the shoreline of the Skeleton Coast. En route you will note lichen fields on the gravel plains, flamingos and pelicans on the salt pans, the bizarre seaside settlement of Wlotzkasbaken and Namibia’s most northerly coastal town – Henties Bay. After the visit of the seal colony at Cape Cross (one of the largest in the world), we travel inland towards Damaraland, with the backdrop altering dramatically as we traverse from desert to jagged mountains and semi-arid sparsely vegetated desert. At the Messum Crater (a massive impact crater of geological significance) you will witness some of the best illustration of Welwitschia to be found in Namibia. The expedition then heads back to Swakopmund. 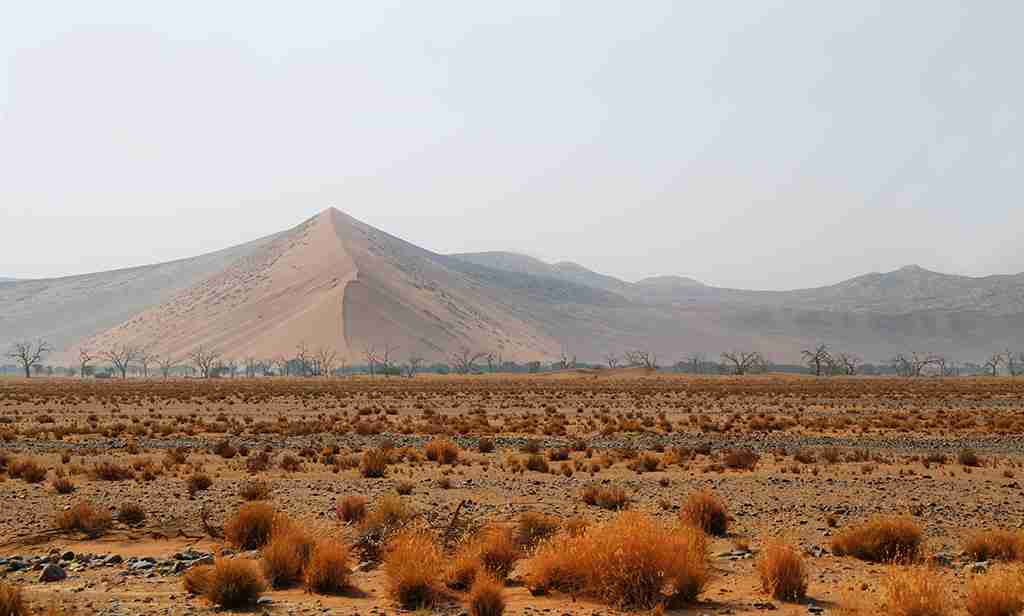 Visitors are transferred to a local air strip for a charter flight to Sossusvlei. Sossusvlei is a mud pan which originated because of a river flowing through the Namib Desert every 5 to 10 years. Even in very wet years, the river does not reach the Atlantic Ocean, but drains away into the dunes at Sossusvlei. ‘Sossus’ means ‘place of no return’.

Visitors spend three nights at Sossusvlei. The pursuits focus early morning guided nature drives to the spectacular dunes of Sossusvlei through the private gate on the Tsauchab River. . Sossusvlei literally translates to “dead-end marsh”, as it is the place where the dunes come together preventing the Tsauchab River to flow any further, some 60km east of the Atlantic Ocean.  However, due to the dry conditions in the Namib Desert the River seldom flows this far and the pan remains bone-dry most years.  During an exceptional rainy season the Tsauchab fills the pan, drawing visitors from all over the world to witness this spectacular site. Photographic enthusiasts are spoilt with a glassy “lake” holding reflections of the surrounding dunes.  The dunes in this area are some of the highest in the world, reaching almost 400 meters. When the pan fills it can hold water for as long as a year. 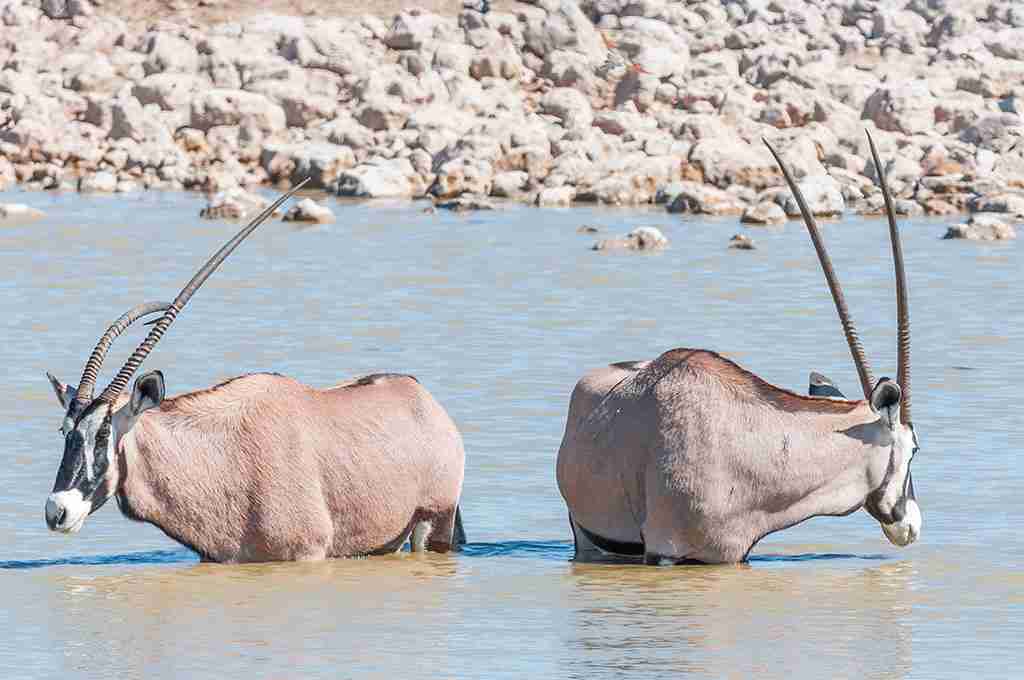 The final morning nature activity at Sossusvlei is followed by a charter flight to Windhoek and from there an onward connection to Ongava. Ongava is a private concession just outside the Etosha National Park . Etosha National Park main characteristic is the salt pan so large it can be seen from space. There is abundant wildlife that congregates around the waterholes, giving you almost guaranteed game sightings. The Park offers a complete contrast of wide open grasslands, a massive pan that covers 4731 km² and large camel thorn trees mixed with Mopani trees. This diverse vegetation accounts for the abundance of wildlife that thrives in the park.  Birders will love the rainy season in Etosha.

Visitors spend three nights at Ongava. Two game drives are performed daily by experienced rangers and trackers. Etosha is not only one of the most sought-after parks in Southern Africa, but also has a remarkably high number of predators to herbivores. This fact offers guests a brilliant opportunity of experiencing thrilling confrontations between lion and impala, zebra, wildebeest or Springbok. The constant springs along the fringes of the Etosha Pan draw huge concentrations of wildlife and birds.

Breakfast is followed by a final morning game drive at Ongava after which visitors fly by charter plane to the Caprivi strip. The Caprivi strip was named after the German Chancellor General Count George Leo von Caprivi di Caprara di Montecuccoli. Caprivi lies in the centre of Southern Africa. It is bordered by the four countries of  Angola, Zambia (north), Botswana (south) and Zimbabwe (east). Three perennial rivers cross the Caprivi, making it a wetland paradise in the otherwise arid Namibia. Ideally located, the Caprivi links one closely to the world renowned Okavango Delta and Chobe National Park of Botswana, Zambia’s and Zimbabwe’s Lake Kariba and the seventh wonder of the world the ‘Smoke that Thunders’ (‘Mosi o Tunyu’) of Victoria Falls.

A final morning game activity in the Caprivi is followed by breakfast after which guests fly to Windhoek and from there take an onward connection to Johannesburg. Visitors will be met on arrival at O R Tambo International Airport and then shuttle transferred to any location convenient to them in either Johannesburg or Pretoria after an unforgettable Namibian safari. 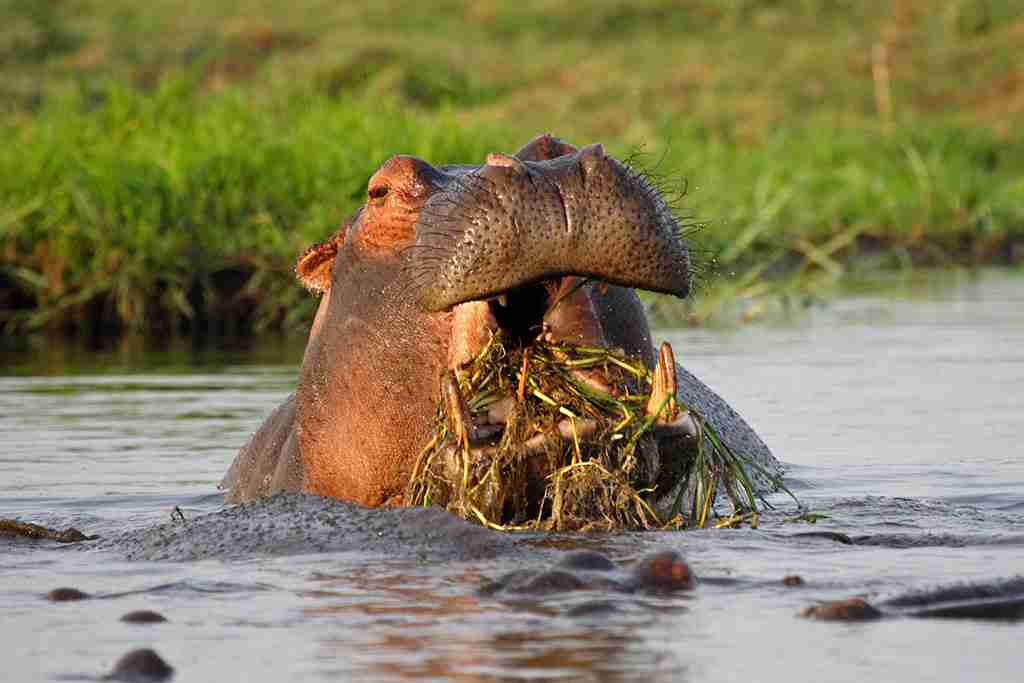 This private overland safari covers numerous attractions found in northern Namibia and the expedition is led by your experienced tourAfrika guide. You will adore great game viewing in Etosha National Park, prehistoric art in Twyfelfontein and coastal appeal in Swakopmund.

14 DAY FAR-REACHING NAMIBIA, FLY-IN
We use cookies on our website to give you the most relevant experience by remembering your preferences and repeat visits. By clicking “Accept”, you consent to the use of ALL the cookies. Read More
Do not sell my personal information.
Cookie settingsACCEPT
Manage consent